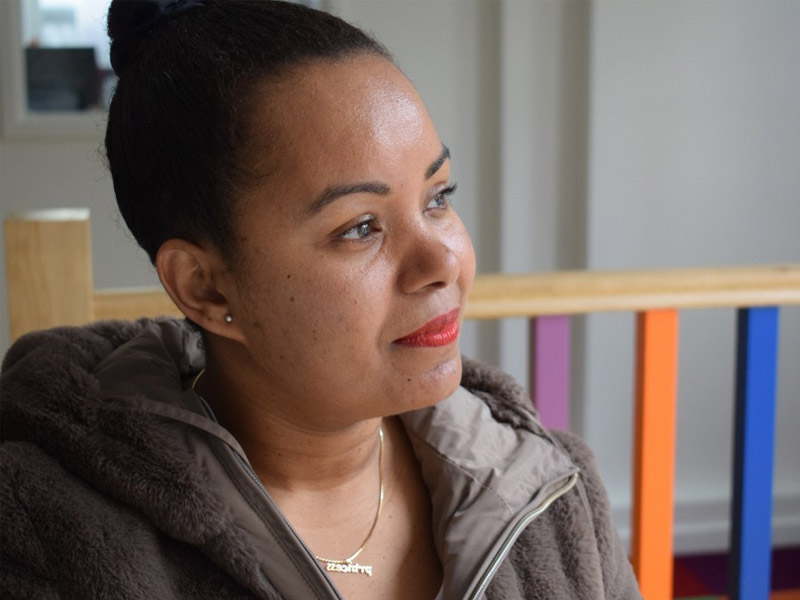 The Cardinal Hume Centre provides a wide range of services to the young and homeless. Feven’s story reveals some of the many ways in which just one person may come in to contact with the Centre’s various specialists and helpers.

Feven’s smile lights up the room, though her young life has seen its share of challenges. When she first came to the Cardinal Hume Centre the 26-year old Eritrean asylum-seeker was desperate to find paid work but had limited English and no UK work experience. Her bubbly, courteous and engaging manner impressed Jeanita, an employment advisor at the Centre, who introduced her to Jay, manager of the on-site charity shop.

Within a week, Feven was volunteering in the shop and serving her first customers; within a few months, she was covering for Jay, when the manager was absent. Her retail skills and English dramatically improved, and Jeanita encouraged her to apply for paid retail positions. Sadly, Feven then discovered she was suffering from a glandular condition, and had no option but to follow medical advice and focus on her health. It was at this point the housing team at the Centre stepped in, using its network of contacts to help Feven to move from a homeless women’s shelter without any practical support, to a women’s refuge that provided shelter, educational opportunities and help navigating the health and benefit system.

The Centre’s Immigration team played their part, too – working with them, Feven secured her right to stay permanently in the UK and her health steadily improved. But, because of the gaps in her CV, it proved difficult for Feven to get an interview. So Jeanita turned to Pret a Manger, one of the Centre’s valued employment partners. “Pret runs a special program called Rising Stars,” explains Jeanita, “They provide on-the-job training to people who are homeless and living in hostels, as well as an empathetic understanding of the challenges participants face.” On graduating from the programme, Feven was offered a full-time paid contract with Pret where she quickly established herself as a valued team player.

Her customer-service skills and strong work ethic also made her an ideal candidate for the company’s latest venture, a new branch staffed entirely by those who had come from a homeless background – when it opened Feven was at the till ready to greet the first customer! And when Pret opened Pret House, a 13-bedroom annexe for its Rising Stars to live in, one of the rooms was named the ‘Feven Room’ to honour her achievement. Hind Meflah, manager of Pret’s Rising Stars programme, says, “I remember when I first met Feven. She was a little shy but her beautiful smile said she was a lovely and genuine human being. Watching her blossom has been a real pleasure, and I am looking forward to celebrating her future successes.”

Feven’s relationship with the Cardinal Hume Centre did not end here. On 19 February this year, she invited Jeanita to join her at the Old Marylebone Town Hall in London, wherein a formal ceremony she became a full British citizen. Guidance notes for participants state that on becoming a British citizen, “You will lose any refugee status you may hold in the United Kingdom,” and Jeanita laughs as she recalls Feven’s eagerness to cut up her residence permit and exchange it for a British passport. Her place on the Pret management scheme includes a team trip to Austria and, with her new passport and recently acquired citizenship certificate hot in her hand, Feven is ready to fly.

“Though Feven’s story is unique,” says Jeanita, “the support she received at the Cardinal Hume Centre is not. Because we offer, under one roof, specialist support in immigration, employment, housing and information about benefit entitlement, we can help those who come to us struggling to resolve the complex and varied problems arising from homelessness.” The Centre enables long-term resolutions rather than short-term fixes. In Feven’s words, “The Cardinal Hume Centre has been my lifeline. I will always be grateful.”